About the Reykjavik Peace Center 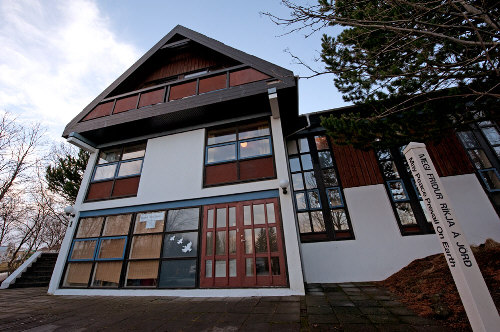 The Reykjavik Peace Center Ambassador Club House (Orlofshus Fridar 2000) is operated by the Peace 2000 Iceland society (Fridur 2000 Island) for accommodating Peace Ambassadors and peace loving people from all over the world.  If you are not already a member of the Peace Ambassador Club we will be happy to grant you a free complimentary introductory membership. During your visit to the Reykjavik Peace Center you will have the opportunity to upgrade your membership and receive a decorative letter of credence of your appointment as an Icelandic Peace Ambassador.

This is the house of the Peace 2000 Institute, a non profit organization with associates in more than 40 countries.  From here we have organized several peace and humanitarian projects and made radio broadcasts from our fully equipped studio in the basement.

Peace 2000 has for a number of years flown humanitarian aid to children in war torn areas and produced TV infomercials against violence. Peace 2000 was founded in 1995 at a town meeting set by the Icelandic Minister for the Environment with 500 people and speakers from organizations around the world, including UNESCO, World Court Project and the Cherno- byl Childrens Project. Peace 2000 has been awarded for its Santa aid flights to war torn areas done under a special permission of the UN Security Council, by the Gandhi Foundation, UNESCO and the Greek Orthodox Church who decorated its founder, Icelandic Presidential Candidate Thor Magnusson with their Holy Gold Cross for humanitarian work at a ceremo- ny in memory of Mother Theresa and Princess Diana. The work of Peace 2000 has been featured by REUTERS, CNN, ABC, CBS and others. Peace 2000 has worked together with several other charities, including the Red Cross and the Red Crescent.